so to honor my birthday symbol, i am going to get a scorpion tribal tattoo on my arm.

i have seen many smaller scorpion tattoos which styles range from realistic pictures or cartoon scorpion style but tribal designs have always caught my eye.

the tattoo will be a quarter sleeve done on my right arm starting at the shoulder blade and ending at the top of my elbow. the scorpions tail will wrap around my arm ending before the elbow, the inner body will be made of three zodiac signs of my family members and the claws will start at my top shoulder kind of like older knight armor protection will be the way its put on my arm here is the type of zodiac symbols that will make up the inner body..

here is the placement on the right arm i want…the photo shows a kinda smaller design compared to a bigger size i want but basically how much arm will be covered..

any suggestions or inputs on the design would be greatly appreciated…i forgot to mention that im a guy and didn’t really know if that would impact ideas of design or not considering my design could be unisex.

You thought about getting something different? tribal is a bit outdated now, a lot of shops refuse to do it and to be perfectly honest, it’s just Black and boring IMO

well actually didn’t consider the tattoo to be different or original.. I just like the look of tribal the best.

Mine does, they’ve refused to do tribal for some time now, and they’re not alone.

Good luck though, if it’s what you really want, then go for it but think really, really carefully before committing 🙂

wow that stinks.. thank you for the heads up!

That’s my input, you choose whether to get it or not.

well I have the rest of my body to get anything!

it’s just I’ve always wanted tribal on my right arm.. thanks for input =]

Most people who have a good knowledge of the tattoo industry hate tribal. I dont mind the islander style but the one you want is awful. I mean no offence, just my 2 cents. There’s so many more interesting and artistic tattoos available for the same price, I think you should do some research into different styles before you make up your mind.

honestly I love scorpion and only form that actually looks awesome to me is the tribal..

I wont bother telling you my own opinion of that design or tribal in general. Id rather give you some good advice.

First, I think youare trying to cram too many things in at once. “the inner body will be made of three zodiac signs of my family members”… no matter how i picture it in my head, it just seems to never work well. THe style of tribal you have chosen is not usually very complicated, and i think adding those other symbols will just end up looking like a big mess of black.

Secondly, the idea of the tail wrapping around your arm alot of times doesnt really look as awesome as you would think. Because its a 2D image on your skin, and not a 3D object, tattoos like this can often come out looking flat and unwhelming, simply because you can in no way see the other side of the arm where the other sections are. I fear the tail will end up looking “disconnected” no matter which way you look at it.

Thirdly, i know you are pretty set on getting this style of tribal now. But i have met TONS of people who got something like this, and came to regret it. Its actually crazy how many people jumped on the bandwagon of tribal in the nineties, only to get it covered up.. or at least try… because tribal tattoos, especially larger ones like the one you intend to get, can be quite difficult to cover up, and alot of times require laser removal treatments to lighten it up enough to have it covered…which is very expensive.

Finally, The way you described it.. it wont be a “sleeve”. “sleeve” refers to a tattoo or collection of tattoos that cover the arm all the way around, or at least a large portion (think 80-90% of the skin). It also wont be a “quarter sleeve”, as that refers to a “sleeve” that covers a quarter of your arm (generally from shoulder to half way down your upper arm). Dont mean to sound like a dick, it just irks me when people misuse the word sleeve.

thank you… that’s probably the best advice anyone’s given.

though I am dead set on the tribal.. I’ll deffinately have to readjust the tail. 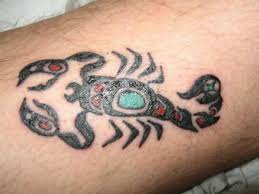 Have you not considered getting a realistic looking scorpian?

yea I just not into the realistic look at all. I’ve seen some great realistic scorpion tattoos.

Oh well we have tried changing he’s mind guys, i think he has gone to the dark side. He’s to far gone.