I’m workin on a cover up…. the dreaded “name” cover up. I want a Deadly Tropical flower and I can’t find any sites with the names of the flowers (with the pics) Can someone point me in a direction? Thanks

Here’s one called the “nightshade”, or “Devil’s Cherry”

The genus name “atropa” comes from Atropos, one of the three Fates in Greek mythology (the one who cuts the thread of life), and the name “atropa bella donna” is derived from an admonition in Italian and Greek meaning “do not betray a beautiful lady”.

Thanks Bender…. but the name is about 2 3/4″ long, 1″ wide and curved on my chest. I went to discuss the cover up with my artist last night and she advised me to find something a bit flowy and she would make it work.

I found this one that I like but have NO idea what it is since I have never seen one before…. Does anyone have a clue?

its verry dificult as you are not giving any clues of what this plant looks like in colour or anything :confused:

how about a triffid 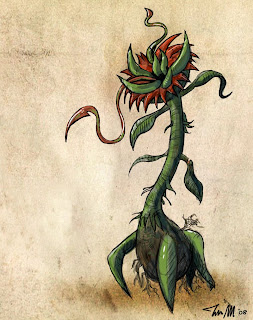 .
IF YOU ARE A NEW MEMBER THEN CLICK HERE and introduce yourself out of courtesy
this is a community for interacting not just an index search system for frequently asked questions in the tattoo world….
March 13, 2010 at 2:02 pm #84043

that’s just it OUtlaw. lol I want something a bit colorful (as my artist refuses to do black/grey on me anymore…lol) I’m trying to FIND a good pic of ANY deadly flower and I will pick from there.

it looks like some kind of white orchid to me

.
IF YOU ARE A NEW MEMBER THEN CLICK HERE and introduce yourself out of courtesy
this is a community for interacting not just an index search system for frequently asked questions in the tattoo world….
March 13, 2010 at 10:10 pm #84057

Also known as lady laurel or paradise plant, Daphne is a 1-1.5 meters tall shrub, usually grown for its scented flowers. All parts of the plant are poisonous, but the greatest concentrations are in the sap and berries. Daphne contains mezerine and daphnin, two powerful toxins that cause stomach aches, headaches, diarrhea, delirium and convulsions. If Daphne berries are consumed, the victim might fall into a coma and even die.

Just like the Daphne, Lily of the Valley may look beautiful and harmless, but it is entirely poisonous. Eating one or two of the plant’s bell-shaped flowers won’t hurt you very much, especially if you’re an adult. Eaten in large quantities, Lily of the Valley causes pain in the mouth, nausea, vomiting, cramps and diarrhea. People with heart conditions should be most careful since the toxins cause the heartbeats to slow down or become irregular.

Known as one of the most poisonous plants in the Western hemisphere, Belladonna contains potentially lethal tropane alkaloids. The entire plant is harmful, but its good-looking berries pose the most danger, especially to kids. The symptoms of Belladona, or Deadly Nightshade poisoning are dilated pupils, blurred vision, headaches, hallucinations, delirium and convulsions. Atropine, the toxin contained by Belladona, can kill a person by disrupting the nervous system’s ability to regulate breathing, sweating and heart rate.

Despite its name, there’s something very evil about this plant. The toxins it contains can be fatal to humans and a number of animals. Known as a powerful hallucinogen, Angel’s Trumpet should not be used for recreational purposes, since the risk of an overdose is very high. Angel’s Trumpet plants contain a variable amount of tropane alkaloids, like atropine and scopolamine, and it is used in shamanic rituals by indigenous tribes in western Amazonia.

This popular evergreen shrub, featuring large, beautiful blooms, has been known for its toxicity since ancient times. Xenophon recorded the odd behavior of a group of Greek soldiers who had eaten honey from rhododendron flowers. Rhododendron contains andromedatoxin which causes nausea, severe pains, paralysis and even death. Azaleas, members of the same plant-family as rhododendron, are also poisonous.